Try this at home

Source: jenbekmanprojects.tumblr.com via Matt on Pinterest
Posted by J. Kenneth Leap at 6:00 AM No comments:


Site/Light from Ed Carpenter on Vimeo. 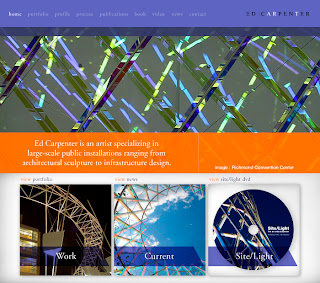 Email ThisBlogThis!Share to TwitterShare to FacebookShare to Pinterest
Labels: design tools, how to, new technology

More: http://wholeo.net/wholeodome.htm
Posted by J. Kenneth Leap at 6:00 AM No comments: 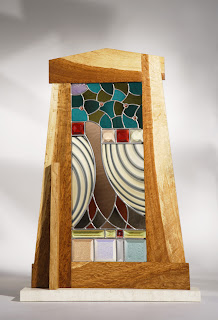 For forty years Larry Zgoda has worked in the boundary lands between art and craft. It’s hard to call him a contemporary artist because his work does not seem to address the puzzlement and alienation of postmodern art, but it’s hard to call him a crafter because his combinations of glass, wood and metal seem to offer something deeper than comfort, surprise or entertainment. Following the lead of earlier Chicago designers like Louis Sullivan or his mentor, Edgar Miller, Zgoda’s work is quietly but insistently dynamic, aggressive and bold, with that inner seed-growth energy of which Sullivan wrote. Like the geo-form painters, Zgoda builds up a tension among colored circles, triangles and parabolic lines. But there’s also the translucent/transcendent qualities of the glass that manipulate light in a variety of traditional as well as innovative ways, invoking a sense of mystery and magic. Zgoda creates places of wonder, either site-specific or, as in this group exhibition, as something like portable shrines. These miniature tabernacles are what he calls “architonomous” sculpture, i.e., the space around them feels architectural even if they are autonomous. It’s the same way a medieval head or torso feels when it’s been cut from the wall of a monastery and relocated in an art gallery. As a liturgical artist without a liturgy, there does seem to be some kind of strong, glowing, and benign presence emerging from each piece. But maybe it’s just him. (Chris Miller)
Through September 1 at Vale Craft Gallery, 230 West Superior

GlassBuild America 2012 will be held September 12–14 at the Las Vegas Convention Center.  It will again serve as the most important annual gathering of North American glass industry professionals.  The show will feature more than 120,000 square feet of exhibit space, nearly 330 exhibiting companies, industry leading forums, seminars and expert panel presentations, the popular Innovative Product Pavilion, and several of the industry’s most respected speakers.
For more information on GlassBuild America, visit www.GlassBuildAmerica.com.

A Call for Entries for ECVA's exhibition: Mary, Mother Of Our Tribe has just been published. You can see it here: http://ecva.org/calls.html

Email ThisBlogThis!Share to TwitterShare to FacebookShare to Pinterest
Labels: call for artists, exhibitions

Betti Pettinati-Longinotti, SFO, of Winston Salem, NC, has been designing and producing glass art since an apprenticeship in 1977-78.  She received a BFA from the Maryland Institute, College of Art and her MA from the University of the Arts/ Philadelphia, 1987, in Art Education with a studio major in Glass; MFA in the Visual Arts from the Art Institute of Boston at Lesley University, June 2012.

Born in L.A. and now based in New York, artist Tom Fruin created a recent installation that adds a little sparkle to the already dazzling Brooklyn skyline. His monumental sculpture, Watertower, is built out of salvaged plexiglass and steel, and is mounted high upon a water tower platform located in DUMBO, Brooklyn. The mosaic design consists of about 1,000 scraps of plexiglass that were retrieved from all over New York City, ranging from old sign shops to closed-down artist studios and various warehouses.

Read the full post here: http://www.mymodernmet.com/profiles/blogs/tom-fruin-watertower
Posted by J. Kenneth Leap at 10:09 AM No comments:

Email ThisBlogThis!Share to TwitterShare to FacebookShare to Pinterest
Labels: museum

This exhibition celebrates Louis Comfort Tiffany’s (1848-1933) revolutionary contributions to modern decorative lighting. More than 40 lamps in an array of colors, sizes and decorative styles are featured in sections exploring the themes of fabrication, design, lighting technologies, and affordability. The show also includes tools, materials and period photographs to demonstrate how the lamps were made.

The exhibition is the first in-depth look at the Tiffany Studios’ deliberate efforts to produce lamps that balance artistry with utility and profitability. As articles of utility, reading lamps, floor lamps, and hanging shades came in a wide variety of sizes and shapes to regulate and direct light. As objects of art, the lamps, with their interplay of colored glass and richly sculpted bronze, brought beauty into the home.

The exhibit is organized by The Neustadt Collection of Tiffany Glass in New York City.

You can never learn enough about good design - in fact sometimes it's hard to know where to go learn anything about design. Here is an inspiring TED TALK by the designer Paula Scher:
http://www.ted.com/talks/paula_scher_gets_serious.html

I stumbled upon this website while researching reverse glass painting. While there is no "stained glass" to be  seen here, site author John Kohan explores the Christian sacred art of many cultures, often trying his hand at working in those techniques. His writings about his journey is compelling. Here is some of the work Kohan has collected on his website: Sacred Art Pilgrim 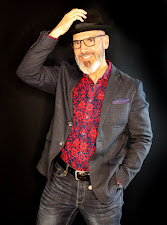